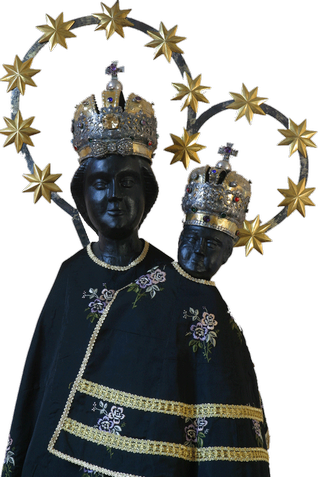 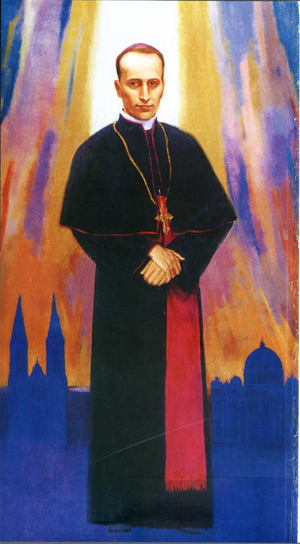 The Zagreb archbishop and car- dinal the blessed Alojzije Stepinac (1937'1960), as a devoted won shiper of the Mother of God, was connected with the shrine of the Mother of God of Bistrica. He used to walk from Zagreb at the head of the Zagreb pilgrims, to preach in Marija Bistrica, and he encouraged all the faithful to greater piety to- wards the Blessed Virgin Mary in his circular letters. In 1939, he invited Croatian bishops, priests and believ- ers to support the organization of the Bistrica shrine. The same year, lead' ing a pilgrimage to Rome on the OC' casion of the 1300th anniversary of the first links of the Croatian people with the Holy See, he announced the devotion of the Croatian people to the Blessed Virgin Mary, and the building of the Bistrica Calvary with the Stations of the the Cross. On the last Sunday of October, on the feast of Jesus the King, in 1939, he laid the foundation-stone for the chapel of St Peter, at the foot of the mount below the basilica and the parish building, which would be used for giving Communion during mass pilgrimages. The chapel of St Peter is today a chapel for votive gifts, and sometimes it serves as a solemn hall for various meetings.

Archbishop Stepinac’s vow to Mary Jesus’s Mother
“We promise to remain your faithful and sincere admirers! Faithful while our small streams murmur, our rivers roar, while our dear sea foams!
Faithful until our meadows gleam green, while our meadows shine golden, while our dark woods cast a shadow,
while the flowers of our country smell sweet. ”

The International Congress of Mary in 1971 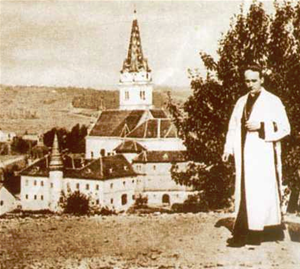 The first magnificent pilgrim’s meeting after the end of the Second World War took place on August 15, 1971. That was at the end of the Vlth International Congress of Mary (August 6 to 12, 1971 in Zagreb) and the Mary’s XHIth Inten national Congress from August 12 to 14 in Zagreb, and August 15,1971 in Marija Bistrica. Both congresses were organized by the Papal Acad' emy of Mary in Rome at the head of which was the Croatian Jesuit f. Karlo Balic for many years. The Em charist celebration was led by Pope Paul Vi’s envoy, cardinal Franjo Seper, the head of the Congregation for the Doctrine of Faith (19684981) and a previous Zagreb archbishop (19604968). The Em charist was celebrated by a then ah most inconceivable number of wor^ shipers in communist countries, 150.000 pilgrims.
During the celebration, the very Holy Father Paul VI. (19634978) spoke to the gathered pilgrims by means of radio Vatican. The same pope donated the golden chalice to the Bistrica shrine.

The Declaration of the National shrine in 1971 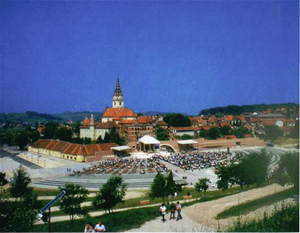 At the autumn plenary session of the Bishops' Conference of Yugoslavia, on December 3, 1971, Croatian bishops, promulgated the parish site of Marija Bistrica, recognized as a shrine by all Croatian people - the Croatian National Shrine of the Mother of God of Bistrica, the Queen of the Croats.
"The soul of Croatia,
the Mother of Jesus,
the sun during our sufferings,
do not stop shining!"
(Jeronim Korner, on the wall of the shrine) 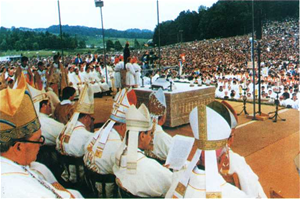 Another magnificent pilgrimage of the Catholic Church took place for Croats on September 9, 1984. A multitude of 400.000 pilgrims poured to Marija Bistrica on that day. That was the most recent cele- bration of Thirteen Centuries of Christianity among the Croats. The celebration lasted for nine years and included various anniversaries: from the christening of the Croats in 641 (Viseslav’s baptismal font and Viseslav’s cross), the celebration in Solin (Mary in Croatia’s original shrine), in Biskupija near Knin (the oldest surviving Croatian figure of Mary), in Nin (Branimir’s year, the votive cross), and the 300th anniversary of the finding of Mary’s statue in Marija Bistrica (1684' A 984). The final celebration was the National Eucharist Congress (NEK ‘84), led by the archbishop of Vienna, Franz Koenig (as political circumstances did not allow the Pope’s presence), a special envoy of Pope John Paul II, who was the cob league of Zagreb archbishops, the blessed Alojzije Stepinac and cardinal Franjo Seper. The then Zagreb archbishop, cardinal Franjo Kuharic delivered a sermon at this and many other jubilant celebrations. He gave added strength to Croatian believers in their Catholic faith and their Croatian Catholic identity.

The Proclamation of the Blessed Cardinal Stepinac 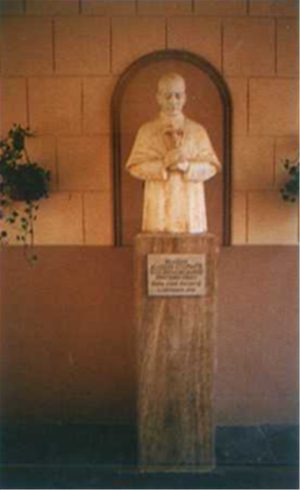 In the historical memory of the National shrine of Mary, the Mother of God of Bistrica in Marija Bistrica, the date of October 3, 1998 is in- scribed with golden letters. That Saturday and that October devoted to Mary, Rome’s prelate John Paul II, the Polish Pope from White Croatia, a pilgrim to Mary’s shrines all over the world, all honouring Mary (Totus tuus), proclaimed the previous Zagreb archbishop and Bistrica pilgrim, cardinal Alojzije Stepinac (1898-1960) the blessed. This took place below the miracu- lous black statue of the Mother of God of Bistrica, the Queen of the Croats, and at the pious request de- livered in front of almost five hundred thousand pilgrims by the present day Zagreb archbishop, mons. Josip Bozanic (1997')- While the multitude of believers sang and gave thanks with the words of the Croatian people’s Christmas song “The sky proclaims and the voice from the sky confirms”, the sky, which until then was slightly covered with clouds, ‘spoke’ with the sun’s rays. In that act of beatification of the archbishop and martyr Alojzije Stepinac, the Croatian people recognized that just victory ovecomes evil, and especially totalitarian regimes: fascism, national socialism and communism. When it is a question of truth there can be no yielding. That was the victory and the recognition of the just struggle for truth, freedom and equality, for faith in God and respect of mankind, for the dignity of the individual and love for all.
As a sign of thankfulness towards the Saint Father, the authorities of the community of Marija Bistrica renamed the main square in the town from ‘the Square of the Republic’ to the Square of Pope John Paul II. Pope John Paul II left a chalice and a golden rosary to Mary’s shrine.