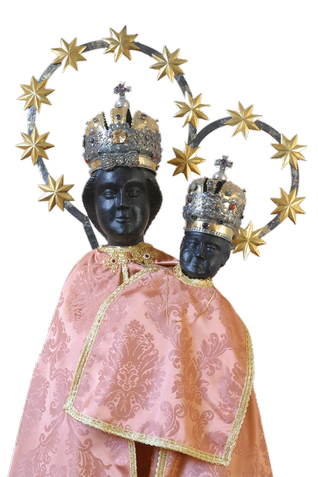 The Prayer to the Mother of God of Bistrica 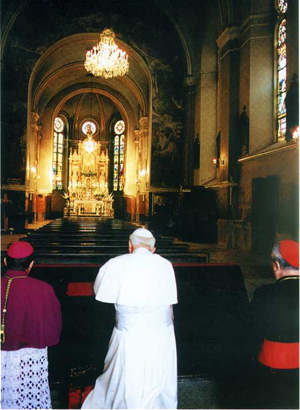 Mother of God of Bistrica, you have chosen, in your Mother’s goodness, in our Croatian Hinterland, the place which is called by you Marija Bistrica. There your miraculous figure is venerated. There is your shrine where you overwhelm with graces your children. There you heal spiritual and physical wounds of earth-bound sufferers and fulfil the wishes of those who come with confidence to you for consolation. You know all my spiritual and physical needs. I have decided to come to you, as God’s and my own Mother, in order to open my heart and express my desires. Please, Jesus’s and my Mother, who have never turned off anybody, answer graciously all my prayers. Amen.
The votive statue of the Mother of God of Bistrica dates from the end of the 15 th century and belongs to the series of black Madonnas, although it was discovered during restoration that its dark colour is not original. The late Gothic wooden statue of the Bistrica Mother of God is the work of an anonym mous master. The expressive strength of this statue is less in the artistic achievement than in its very religious and national significance. The statue was firstly placed in the ancient shrine at Vinski Vrh in 1499, and then it was buried in Marija Bistrica in 1545 and rediscovered in 1588. It was forgotten again and walled in, then refound for the second time in 1684.
The removal of the statue, its hiding, and two findings awoke the belief in its miraculous power. The Mother of God of Bistrica has been the consolatrix of Christians during Turkish danger, a helper both in the First and the Second World Wars, as well as in the Homeland War.
Health for the sick, the refuge of sinners, the consolatrix of the sad, the helper of Christians, Mother of God of Bistrica, pray God for us!

The shrine of the Mother of God of Bistrica in the small town of Marija Bistrica is the largest Cn> atian parish site of religious celebra- tion and it has a central place in the life of the Croatian people. That is why it has been officially proclaimed as the national shrine of Mary. Hum dreds of thousands of pilgrims come to Marija Bistrica every year to bow down before the black miraculous statue of Our Lady, experiencing the joy of being close to God, consola- tion and conciliation and returning to their homes filled with new strength for a Christian life in family and society.

Geographical Position
The shrine of the Mother of God of Bistrica lies in the northeast of Croatia in the gentle Hrvatsko Zagorje (Croatian Hinterland), full of small hills, valleys and fields, be- tween Mount Zagreb or Medvedni- ca, Kalnik, Ivanscica, Strahinjcica and Macelj in the county of Krapina-Zagorje, in a valley next to the northeast slopes of Mount Zagreb. The very village of Marija Bistrica was built around the parish pilgrimage site on the south slopes of mount Vinski Vrh, at an altitude of 191 m on the right side of the Bistrica stream (from which it ob- tained its name), at the estuary of the brook of Ribnjak.

The Village of Marija Bistrica
The village of Bistrica was men' tioned for the first time in 1209 as being in the feudal possession of Count Vratislav. An unique and large manorial estate of Bistrica and its hamlets were divided in the 16th century into smaller possessions which were donated to deserving feudal lords by royal deeds of gift. Among the owners there were some famous families: Keglevic, Draskovic, Sermaga and Jelacic. The last noble family was Hellenbach. As well the Zagreb Chapter pos- sessed a smaller estate in Marija Bistrica. When Ban Josip Jelacic abolished serfdom in 1848, Marija Bistrica became a district community, and judicial centre within the Zelina sub-county. In the 20th cen-tury, Marija Bistrica was administra-tively connected with the Stubice region; it became an independent community when independent Croatia was established.

The Roman Catholic Parish of Marija Bistrica
History is silent about the date when the Roman Catholic parish of Marija Bistrica was founded. In the first known list of parishes of the Zagreb diocese of 1334, Bistrica was mentioned as the seat of the parish with a parish priest and parish church of the apostle saints Peter and Paul. It belonged, in both church and judicial sense, to the Zagreb diocese, the cathedral arch' deaconry and the Stubice deanery.

At the arrival to the shrine:
Mother of God of Bistrica, pray for us.
We are your travellers, bless us!

At the departure from the shrine:
Mother of God of Bistrica, pray for us.
We have to leave you it is a moment full of grief.